⇒ Call Me Heike is bookable as a duo, trio, quartet, quintet or sextet: the instrumentation is flexible, with vocals or purely instrumental arrangements.

The Band, Call Me Heike, has existed in various forms since 2008. It started with a flyer posted in the cafeteria at the University of Tübingen by Eva and responded to by Colleen. Krissi joined some months later when she decided that she wanted to give cello-playing a break and try out playing the bass in a jazz band. Until now in 2015, CMH keeps on flowing. 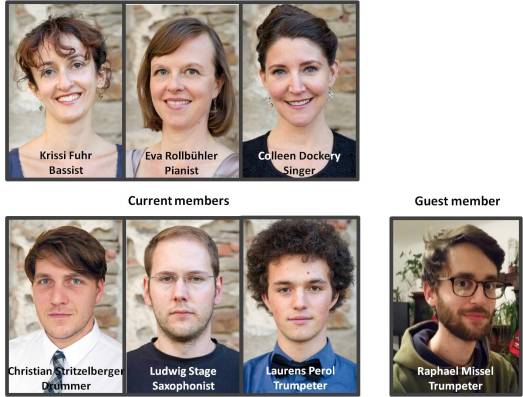 The ladies are the founding members from 2008; the gents have joined in 2014 and 2015. Currently we have quite an amazing group dynamic. It’s very inspiring and we have great fun in creating and performing together!

Felipe returned to his home in Brazil.
Korhan now lives in New York.
Fabian has gone on to greener pastures.
Ander lives between Spain and Germany.

For bookings or inquiries: